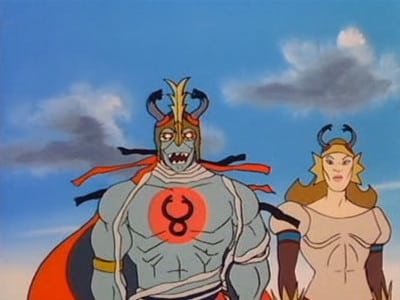 The mutants fail to destroy the Thundercats in an areal assault and find themselves stranded on a far part of third earth inhabited by the good Mumm-Rana. She is suppose to be the exact opposite of Mumm-Ra, serving the ancient spirits of goodness as opposed to the ancient spirits of evil. Somehow Mumm-Ra shows up on the scene and puts her under a spell where she must serve him. These two now evil Mummies plot to destroy the Thundercats and rule third earth side by side as King and Queen.. Surprise surprise good always pevails, and the Thundercats manage to turn Mumm-Rana back to her good self, and banish Mumm-Ra once again.