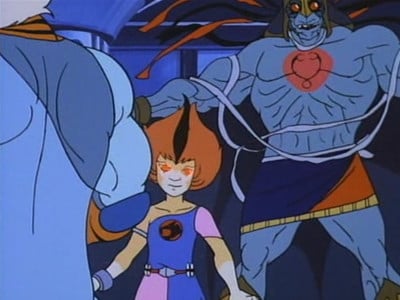 Mumm-ra transforms himself into a ro-bear berbil (a Thundercat ally). He acts hurt and the Thundercats let him stay at Cats Lair. One night, Mumm-ra(the berbil) puts all the Thundercats under his spell, except Snarf, because Tygra held off Mumm-ra just long enough for Snarf to escape. Lion-O was sleeping out in the woods, and Snarf ran to him and told him what happened. Lion-O came back and fought Mumm-ra, who was actually beating Lion-O. Mumm-ra was wearing special glasses so he couldn’t see his reflection. Eventually, Lion-O used the Thundercat signal, broke Mumm-ra’s spell and his glasses, and finally defeated him with his reflection.