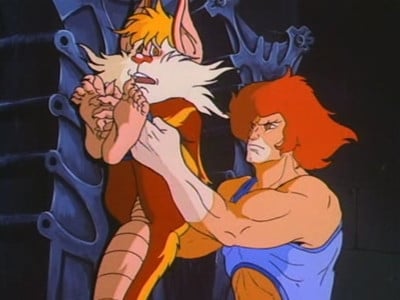 Monkian goes to Mumm-Ra and agrees to give him anything if Mumm-Ra will make him powerful enough to rule Third Earth. Mumm-Ra agrees, and gives him Power Spheres which make him super strong and give him super weapons. He freezes all the Thundercats, then defeats Lion-O and takes the Sword of Omens back to Mumm-Ra. Mumm-Ra takes it, and then says that Monkian’s part of the bargain will be that he can keep the spheres, but he has to stay in Mumm-Ra’s pyramid for all eternity. Walls surround Monkian, and every time he breaks them down, a new set of walls shows up. While Monkian and Mumm-Ra are arguing, Lion-O retrieves the Sword and frees the other Thundercats. Monkian gives up his power to be free again.