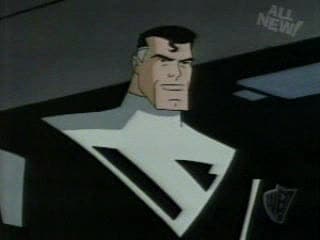 Batman receives a little unexpected help in capturing Inque: Superman. Superman reunites with Bruce Wayne, and extends an offer to Terry to join the Justice League. When Batman’s introduction to the League is met with hostility by the other members, Superman takes Batman aside and explains that he has reason to suspect a traitor in their midst; he asks him to keep his eyes and ears open. Terry reluctantly agrees, finding it difficult to spy on people he’s idolized his whole life. When the League steps in to stop a mysterious attack on Metropolis, a missile explosion claims Warhawk’s life. Batman is the only one to witness the event, which puts suspicion squarely on his shoulders.