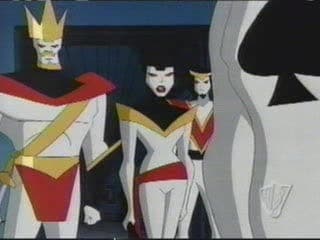 The Royal Flush gang, minus the reformed Ten, attempt a robbery of a Gotham city museum. Although the gang gets away with the piece, Batman stops Jack and leaves him for the police. Bruce deduces that the Royal Flush gang is working for Paxton Powers, and by listening in on Commissioner Gordon’s interrogation of Jack, he and Batman also discover that there are widening rifts in the Royal Flush family. At the hideout, the King and Queen argue, with the Queen endlessly comparing King to his previous namesake, her father. Furious, the King sets another plan in motion: he kidnaps Powers and holds him for ransom, using Bruce Wayne as a go-between. Powers, reluctant to have his illegal dealings exposed, makes a deal with the gang, to eliminate Bruce, but there’s more than one double-cross afoot. Angie Harmon makes her first appearance as the new voice of Commissioner Barbara Gordon.