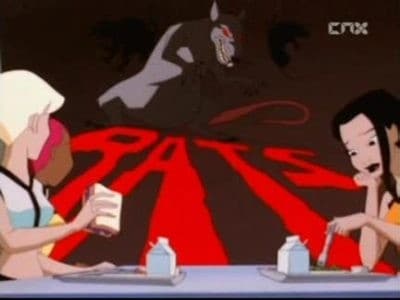 When Dana finally blows up at Terry for his constant absences and broken dates, she finds a single rose in her car. Assuming it’s from Terry, she makes a date to meet him so they can talk. On his way over, Terry is delayed by radical anarchist Mad Stan. Disappointed, Dana gives up waiting, only to be spirited away to the underground world of a boy with rat-like features named Patrick. Smitten with Dana, he promises to always be there for her if she’ll live underground with him. Henry Rollins makes his first appearance as the voice of Mad Stan. Easily Batman’s funniest foe, Stan is a comic exaggeration of Rollins — not only does he look like him, he has a slightly distorted version of the singer’s own personality, distrusting the government and seeing conspiracies everywhere. His solution: blow everything up.