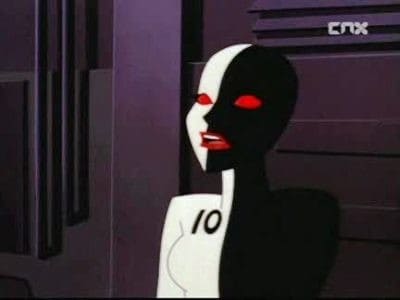 When a daring robbery of a high-stakes poker game between criminals goes awry, Batman is alerted by the sound of gunfire. When he arrives on the scene, he discovers to his dismay that the thief is none other than Ten, of the Royal Flush Gang. Before she escapes, Ten tries to tell Batman that things aren’t what they seem. Because of his feelings for Ten (aka Melanie Walker), Terry is convinced that she’s telling the truth; Bruce Wayne isn’t so easily moved. When Terry returns home he finds Melanie in his room. She tells him her family has been captured by Jokerz, and that she’s being forced to steal in order to ransom them. Terry walks a fine line with issues of trust; beyond his usual lies to Dana and his family about his double life, the situation demands that he also tell half-truths to Bruce Wayne, Max (who knows his identity), and Melanie. And can he trust Melanie’s story about her family’s kidnapping?