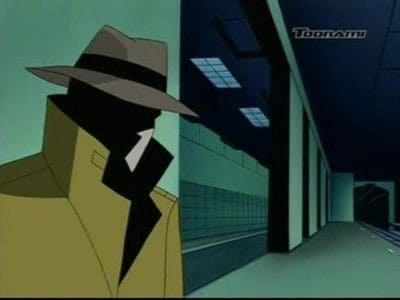 After a rare night out with his friends, Terry follows a suspicious figure out in the subway. Everyone is worried when he fails to reappear the following morning, and Bruce Wayne takes it upon himself to find him. When he asks Max about Terry’s last whereabouts, she insists on coming along, despite his protests. Meanwhile, Batman wakes up in an underground tunnel under the hostile glare of a young boy, a runaway who lives in the tunnels. The boy wants Batman off of his turf as soon as possible, and tries to help him leave. It turns out that the suspicious figure is none other than Shriek’s assistant, who is helping the twisted sound genius with his new plan. Shriek causes a cave-in to trap Batman and the boy, who starts to express his long-standing hostility toward Batman. As Max and Bruce work toward finding Terry, and Batman and the boy try to escape, each learns to appreciate the others’ skills — until Shriek reveals himself from the shadows.